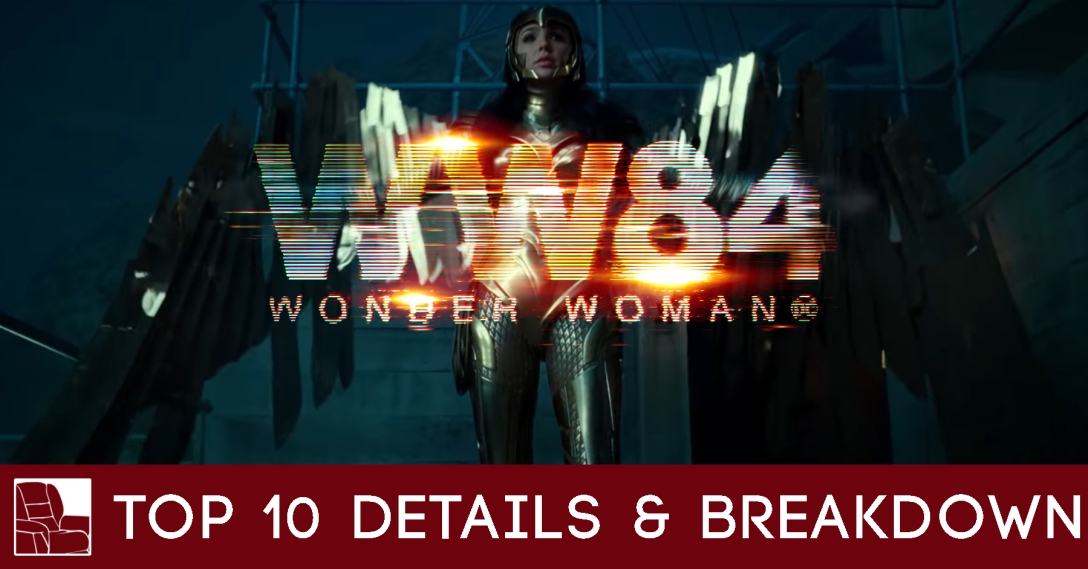 Patty Jenkins’ 2017 superhero film Wonder Woman reinvigorated the DCEU after dismal entries like BvS: Dawn of Justice (2016) and Suicide Squad (2016) all but killed the franchise before it could get through its first act. Thankfully, Jenkins delivered a home run with the surprisingly well-made revival of the Princess of Themyscira. A sequel was nothing if not certain.

As per the title, WW84 is set in 1984 – six and a half decades after the end of the first world war, which was when the first movie was set. Since then, it seems that Diana has taken well to life in man’s world, especially in the roaring 80’s. (Her shoulder pads are proof of that.)

Everything from the shopping malls to Steve Trevor rocking a fanny pack is indicative of the era. But the decade also saw a rise in consumerism and held an interesting political climate at the height of the Reagan administration. Both those things seem to play a substantial role in the film – with the former being the avenue of the film’s villain, Maxwell Lord, and the latter being the presented through the depiction of riots and a literal wall crumbling in the trailer.

Actress Kristen Wiig takes the role of Barbara Ann Minerva, an archaeologist who befriends Diana. In the trailer, they share an intimate conversation about lost loves where Diana says that she did love someone a long time ago, referring to Steve, who as most of you might remember, died during the first movie. Barbara then shares that she, too, has loved so many times… all the time.

In BvS, we learn that Diana eventually becomes a museum curator in modern day 2016 but she’d already had that job since or before the 80s then it would make sense for her to befriend an archaeologist.

Fans of the comics may know Barbara to eventually become the fan-favorite Wonder Woman villain Cheetah. In her iteration in the New 52 line of comics, Barbara was indeed an archaeologist and a close friend of Diana before being given the powers of the Cheetah by a plant god named Urzkartaga. (I know. Comics, right?) It doesn’t seem like they’re going that route in this film, but she has been confirmed to have an actual comic-accurate Cheetah look in the film. We know this from the film’s released concept art. My guess is that she’ll get her powers not from a god but from Maxwell Lord.

We don’t see much of her in her Cheetah form in this trailer but I suspect that DC is saving that reveal for the last couple of trailers that’ll come out just before the movie. We do, however, see what might be a hint of her transformation when Barbara walks into a party looking more risque that she has in the rest of the trailer.

Something good to note is that her final Cheetah look will be combination of CGI and practical effects so we can expect it to look really good.

Pedro Pascall makes a charismatic and vaguely interesting Maxwell Lord. In the comics, Maxwell Lord is what he seems to be in the film – a wealthy businessman who longs for nothing more than power and control. His comic book counterpart has the power of limited telepathy and persuasion – being able to nudge a person into doing something that they already desire without controlling them outright.

In the film, it seems that he’ll still have this ability but the movie version might go about it a different way. Here, he’s a tycoon who advocate’s desire, which seems to be a major theme in the film. “Life is good but it can be better. (…) All you need is to want it. Think about having everything you always wanted.” The trailer hints to the ways that it’ll adapt Maxwell’s powers for the big screen. One of which…

We’re briefly given a glimpse of some kind of artifact in the possession of Maxwell Lord. Nothing’s for sure, but this artifact might presumably the source of his telepathic and persuasive powers in the film. It’s also quite possible that Barbara Minerva, being an archaeologist, helped him procure this artifact, which gives both villains a solid connection within the confines of the film.

Another way that film may plan to adapt Maxwell’s powers is through the use of Brother Eye. In the trailer, we’re given a glimpse of a large satellite dish and, later, another of Maxwell with blue slight shined on him. This might very well be the film’s version of Brother Eye.

One of Maxwell Lord’s most popular story lines in the comics is based on George Orwell’s 1984 (1949), where the concept of the Big Brother was first introduced. This story line seems to play a large role influencing many of WW84‘s plot and themes. Other than the obvious similarities in their titles, Orwell’s influence makes the presence of the Brother Eye satellite all the more valid. In comics, Brother Eye was created by Batman to spy on the world but it was later hacked into by Maxwell Lord, who used the satellite to systematically assassinate all the meta humans in the planet – coordinating sleeper agents to strategically attack the world’s superheroes.

They’ll likely dial this back a bit for the film, making the Brother Eye into a sort of device that’ll enhance the range and potency of his abilities.

Chris Pine surprised everyone when a photo of him on the set of WW84 in a tracksuit with a fanny pack was released many months prior to the premiere of this trailer. Having certainly died in the first film, fans began to speculate on the possibilities of his survival or revival. Comics are ripe with examples that prove that, at least in comics, death isn’t permanent.

We get a little more insight on the matter with this new trailer, however. First off, we can probably discount the theory that Steve is merely a hallucination. We can say this because, in the trailer, we see Steve punch a soldier. Unless DC is pulling a number from Marvel’s book and have started to edit their trailers to fool us, last I checked hallucinations can’t punch people.

That being said, we’re still unsure what brought Steve back or if he’s really back at all. But one thing is for sure, it’s fun to see that the tables have turned in regards to Steve and Diana’s relationship. Whereas in the first film it was Steve who was showing Diana the wonders of man’s world, now it’s Diana giving Steve a tour of 80’s America. A lot of things are better now, Steve. For one, there’s less war. But unfortunately, art is trash now, apparently.

For fans of the character, you may know that Wonder Woman has an invisible jet. Now, I hear you saying “But why does she need an invisible jet if she can fly?” Well, because she couldn’t always fly and this jet was made during a time when she couldn’t. In the golden and silver age of comics, Wonder Woman couldn’t fly at all or, at most, she could glide through the air. It wasn’t until after the event known as Crisis on Infinite Earths (1985-1986) that the character’s origin was rebooted and she was given the ability to fly and as a result of that the invisible plane wasn’t used as much anymore. Although, we can still see some modern examples of it in current comics.

I had never thought that we would, but this trailer seems to hint that we might actually get to see the appearance of the infamous invisible jet or at least a version of it. There is a scene where we find Steve and Diana in the cockpit of some sort of aircraft and fans have speculated with much enthusiasm that this might in fact be that unseen aeroplane. In other shot, we see Wonder Woman whip her lasso into what seems to be thin air before being carried upward from the street by seemingly nothing. I suppose it’s not too much of a stretch to assume that she lassoed herself onto the plane as it passed above her. We’ll just have to wait and see.

Like the first movie, this trailer gives us glimpses of Diana home island of Themyscira, the land of the Amazons. In those shots, we find hints to a contest being held by the Themyscirans akin to that present in many version of Wonder Woman origins.

This was left out in the New 52 and the first film, but many origins depict a contest that’s held between the Amazons who decide on who earns the honor of escort Steve Trevor back to Man’s World when he first crashes on the island – contests that include archery and obstacle courses. I’m not entirely sure what this is exactly in the context of the film but this is what it looks like.

We get a really good look at Diana’s Golden Eagle Armor in the trailer. There are a couple of versions of this armor from the comics. It was featured in the four-issue miniseries Kingdome Come (1996) by Mark Waid and Alex Ross. The armor made a later appearance in the story line Our Worlds At War (2001).

The comic book version was crafted by Diana’s mother, Queen Hippolyta, which is why I think that Diana goes home to Themyscira to retrieve the warrior or, quiet possibly, win it in a Amazonian challenge of some sort.

Being that Cheetah is a major villain in the film, Wonder Woman might be looking to protect herself from the feline fetale’s claws and covering as much of her skin in golden, possibly magical armor is probably the best way to go. Also, it looks dope so either way, I’m stoked.

In perhaps the most WTF moment in the trailer, we see Wonder Woman use her lasso to literally swing across the sky on lightning bolts. What the actual-

Let’s try to think about this because it is insane to look at. Post-Crisis Wonder Woman was molded from clay by her mother Hippolyta and given life by the gods because that’s apparently how babies are born on an island with only one biological sex. But in the New 52, that origin was retconed to having Zeus, the God of Lightning, be Diana’s biological father, which literally makes her a demi-god.

They could be hinting toward this with this scene. Perhaps Diana discovers that her father is Zeus and learns that she has a portion of his powers and she decides to use those powers to rip-off Spider-Man. Who knows?

How do you think Steve Trevor is back? And do you think he’s back for good? If you have some theories on that and if you think I missed anything else, leave your thoughts in the comments below! Also, share this post on social media with the caption “I want a fanny pack.”

Do you enjoy the content on this blog? It now has a Patreon page! If you want to show your support for it, click here to become a patron!