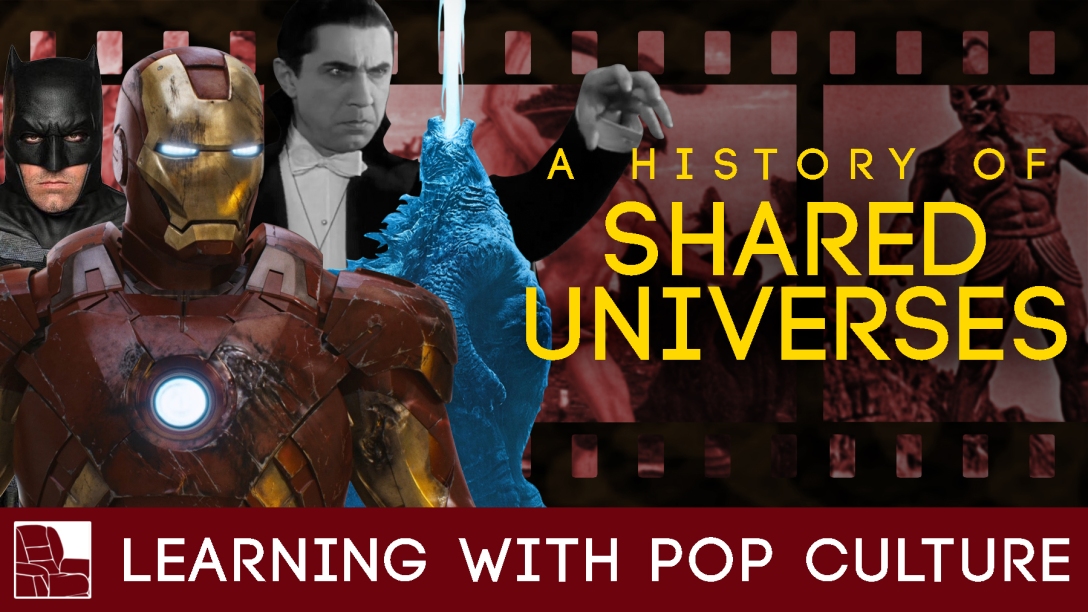 Marvel has been dominating the box office with their cinematic universe. Bringing together the likes of Iron Man, Captain America, Thor, and the Hulk, the Marvel Cinematic Universe started a trend in movies that everybody suddenly wanted a piece of. And I mean everybody!

Since the Marvel did The Avengers back in 2012, we’ve seen the rise of multiple attempted cinematic universes – from Universal Studio’s Dark Universe to the Conjuring Universe to the up-and-coming Monsterverse. Even Marvel’s long-time rival, DC, is trying to get in on the action with their own DC Extended Universe. But that failed to stick the landing as soon as Superman cried out the name Martha.

Suffice it to say that nobody’s done it quite like Marvel has. And that’s true. Marvel was the first to actually plan out ten years worth of movies, creating a franchise that’s taken the world by storm. But, make no mistake. In no way did Marvel do it first. This is a history of shared universes.

Like much of fiction, the concept of a shared universe began way back during the days of folklore and mythology. Authors and storytellers would use each other’s characters and have them crossover with one another in a multitude of epics and ballads. This was common in just about every culture, but the best example for this would be the mythological epics of Ancient Greece.

If Marvel has The Avengers, then the Greeks had the Argonauts, which was a group that consisted of heroes and demigods like Theseus, Orpheus, and Hercules. These are characters who were established long before their stint with Jason and the crew of the Argo.

These interconnected stories where all their gods and heroes could exist created a sense of reality and longevity to these epics. It made them seem all the more real when people started to think of them not as one-off tales but as sagas. As their own history.

This was obviously long before legalities like ownership and copyright were even a thing. But even after the establishment of intellectual property rights in circa the 17th century, authors like H.P. Lovecraft continued the tradition of sharing characters by allowing his friends to use his Cthulhu mythos in their own works, essentially creating a universe shared between multiple authors.

This was the time of pulp magazines, when publishers could care less about how good your story was and more about how many stories you could churn out in a day. The massive demand for short stories in written and comic book form created the practice of characters no longer being owned by authors but by the publishers who printed their stories. This practice allowed for more crossovers between characters created by different authors.

The very first comic book crossover was from a publisher called Timely Comics. They pitted Namor the Sub-Mariner against the Human Torch – two characters created by two different authors. Later that year, one of their competitors would pull off another crossover with the formation of the first super team, The Justice Society of America. Timely Comics would go on to become Marvel Comics and that competitor would later become DC Comics.

These one-shot crossovers would pave the way for the kind of interconnected universes that we’re more familiar with; a universe where Spider-Man, Doctor Strange, Daredevil, and the Fantastic Four all live in New York five blocks from each other.

With the rise of crossovers on the printed page, it didn’t take Hollywood too long to catch up. Universal Pictures was on a monster craze during this time – introducing characters such as Dracula, Frankenstein, The Mummy, The Invisible Man, and The Wolfman individually through out a span of over a decade’s worth of films. But when ticket sales for these ghouls started to dwindle, the producers over at Universal Pictures put two of their best-selling characters in one film – creating the first cinematic universe.

The year was 1943 and Universal Pictures released Frankenstein Meets The Wolfman, the first crossover film in the Universal Monsters franchise. It was marketed as this grand spectacle that nobody could miss, much like how modern-day Marvel movies are marketed. Needless to say, it was a hit.

This kind of spectacle was unheard of in Hollywood before the Universal Monsters did it. But meanwhile, over at the other side of the world, a Japanese production company called Toho was ready to unveil a different kind of monster romp that would completely level the competition.

1954 was the year the world was introduced to The King of Monsters, Godzilla. But it wasn’t until the sequel Godzilla Raids Again (1955) that Godzilla was pitted against another kaiju, something that would become a staple of the Godzilla franchise.

A year later, Toho would release another solo kaiju romp featuring the pterodactyl-like monster Rodan, followed by the giant moth-like creature Mothra in 1961. But the real spectacle began when Godzilla was paired up with the great ape himself, King Kong, in the 1962 film King Kong vs. Godzilla. It was battle of east and west that the entire world could enjoy.

The world was going crazy for giant monster battles and Toho answered the call with Mothra vs. Godzilla in 1964, the first time two individually-introduced Toho monsters would be pitted against each other – creating the Toho-verse.

Toho would one-up themselves later that same year with Ghidora, The Three-Headed Monster (1964), which featured the company’s biggest and baddest, Godzilla, Mothra, and Rodan, against a shared threat, King Ghidora, who was arguably the Thanos of the Toho-verse.

Aside from a number of direct-to-video and made-for-TV films, there wasn’t a notable cinematic universe to follow the Toho-verse long after that. And while franchises such as the Star Wars Saga and the Middle-earth franchise should technically be considered cinematic universes, a true crossover-style shared universe on the big screen wouldn’t happen until the premiere of 2012’s The Avengers.

The MCU, even back when it first started, took a lot of planning to get it where it is now. Like I said, they’re the first to actually plan out ten years worth of films – individually introducing characters like episodes in a TV show.

The Toho-verse and the Universal Monsters didn’t have this level of planning. Their crossovers were born out of fan service or necessity. But their modern incarnations, the MonsterVerse and the Dark Universe, respectively, have taken cues from Marvel – introducing characters in one-off films before bringing them together as an ensemble. And while the Dark Universe flopped with 2017’s The Mummy, the MonsterVerse is going strong with the third film in their franchise coming up.

The mistake that a lot of these up-and-coming cinematic universes make is something that’s pretty apparent when you take a look at the franchises that came before them. The Dark Universe and the DCEU hit the ground running when they chose to introduce a bunch of characters in their first couple of films without developing them beforehand – thinking that the spectacle of having all these popular characters together in one film would be enough to keep their audiences happy.

While the large-scale crossovers are certainly the number one appeal of cinematic universes, it shouldn’t be a film’s number one concern. Marvel has a rule when they’re making their movies that basically says that they should focus on making good movies first, then connect them second. Or as Marvel head honcho Kevin Feige puts it:

“Primarily because we’ve always remained consistent saying that the movie that we are making comes first. All of the connective tissue, all of that stuff is fun and is going to be very important if you want it to be. If the fans want to look further and find connections, then they’re there.”

A film shouldn’t need a franchise to be good. Regardless if it’s part of a shared universe not, a film should be able to standalone, to entertain without having the burden of being supplemented by multiple other films. And for sure, a film isn’t all about the spectacle of its characters. Because without a good story, having all those well-known icons would be nothing but pointless.

The reason why the MCU has been as successful as they have is because they’ve taken an age-old formula, improved upon it, and blew it up to a billion dollar scale. Much like the publishers of pulp magazine that came before them, the producers run the show – hiring directors, writers, and actors who can work with previously molded pieces and turn them into the building blocks of an entire fictional continuity.

Marvel may not have invented the idea of a shared cinematic universe, but they’ve undoubtedly perfected it. Now if only all those other franchises can figure it out.